No Result
View All Result
in Features, Women Speak

Daughters Of The Forest 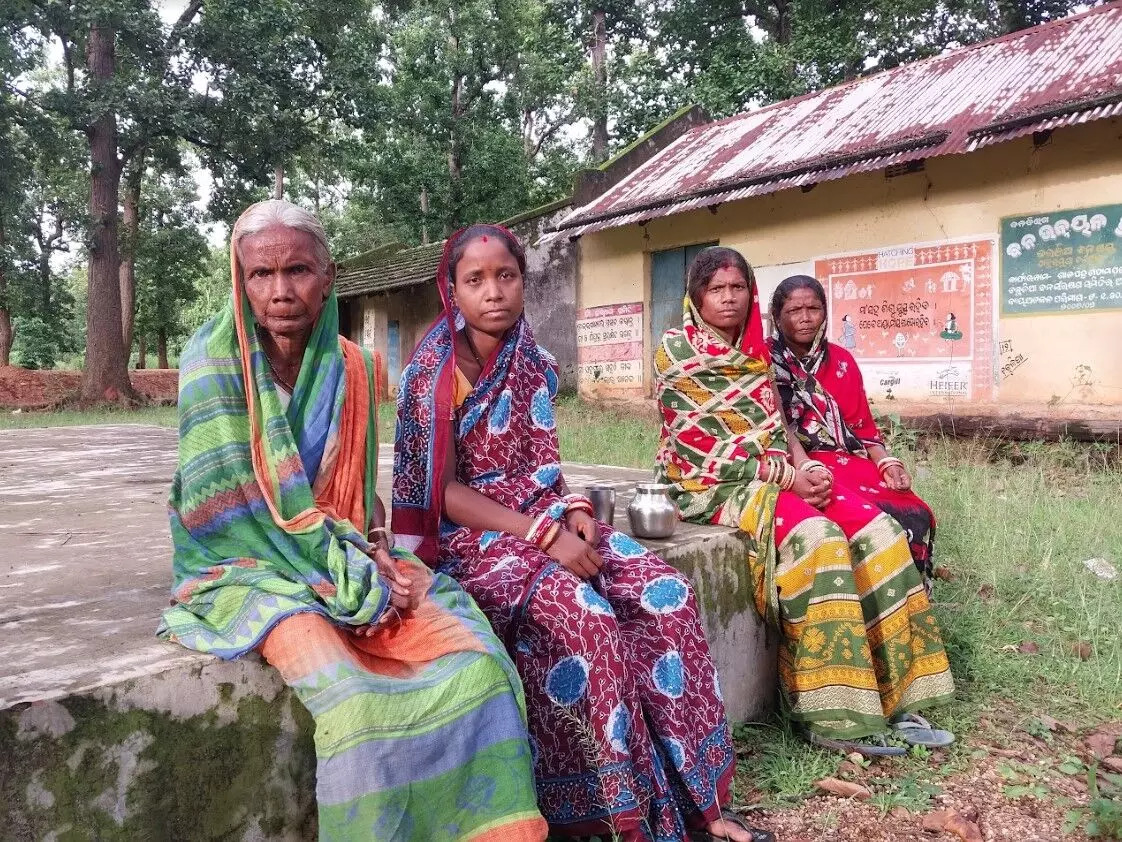 In the last hours of daylight, five women proceeded towards the nearby forest for foraging. A few minutes later, they squealed with delight on finding the bali chhatu, a rare variety of mushroom, found during the monsoon in Odisha. It will be cooked with potatoes and tempered with cumin seeds for a subtle flavour.

In Chakulia, a Saunti tribal-dominated village in Thakurmunda block of Mayurbhanj district, women make daily trips to the forest to either gather edible mushrooms or pluck Sal leaves. The latter provides them a viable source of income through the sale of hand-stitched, leaf plates and bowls.

The forest is a friend for it guarantees these women an assured income throughout the year. Naturally, to gain greater control, the residents of Chakulia placed a claim for management and protection of 325.804 acres in 2020. 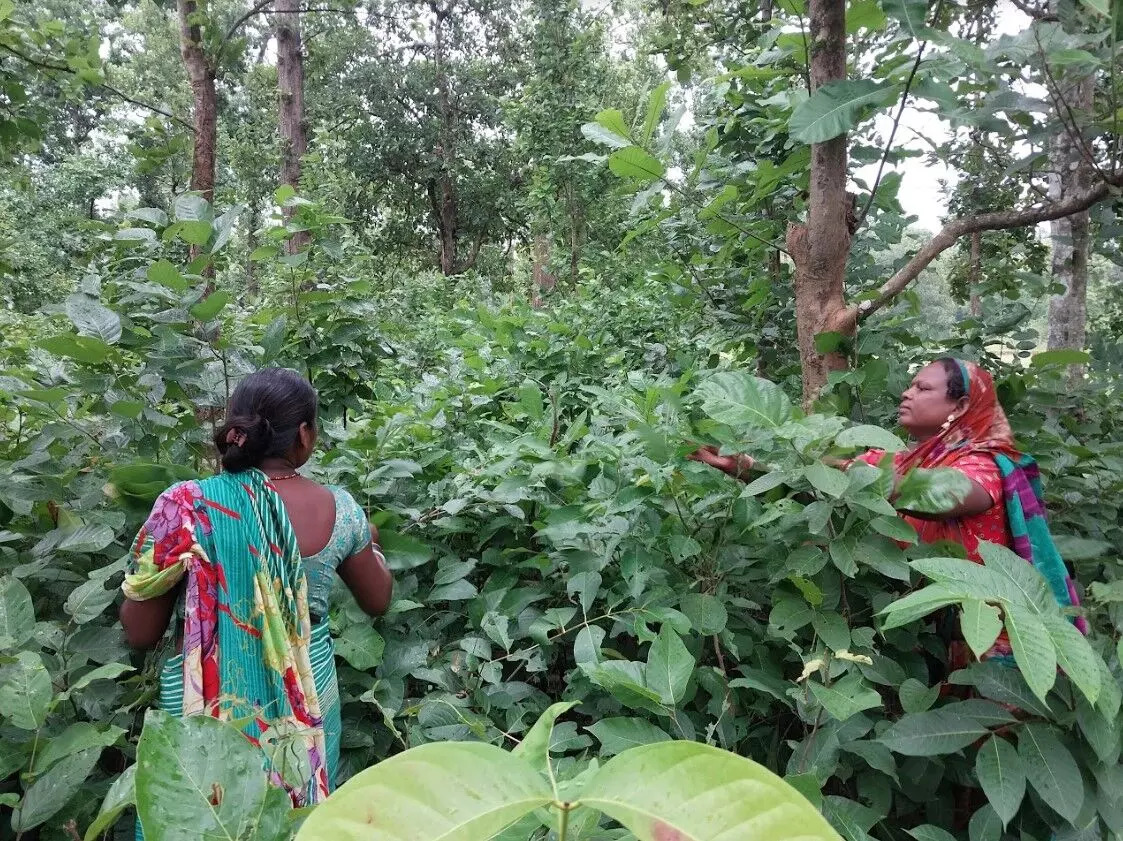 The village received the title under the community forest resource rights or CFRR this year upheld under the Forest Rights Act, 2006. In India, the Act enables tribals and other traditional forest dwellers to claim land ownership.

The women of Chakulia now feel more protective towards the forest than ever before. While stitching Sal leaf plates, Arati Donakuria shared the collective plan of the community for growing trees like Neem (Azadirachta indica), Mahua (Madhuca longifolia) and Char or Chironji (Buchanania lanzan). “Chironji seeds are sold to traders. The rate touched Rs 150 per kg this year during the peak season,” she said.

In Raipada village which also lies in the same block, Sonjulata Dandopat explained that once CFRR is received, entering forests to pluck Sal and Siali leaves will be easy for women. “In several villages of Mayurbhanj within a distance of 30 km from the Similipal tiger reserve, forests lie at a stone’s throw away. Sometimes, wild animals like jackals, bears and even elephants are spotted,” Dandopat. The village placed its CFRR claim on 344.21 acres in May this year and is yet to receive the ownership.

Rajib Lochan Dehury, who works for PRADAN in Mayurbhanj, shared Dandopat’s sentiment. Dehury said women access forests for livelihood but as long as the forest department exerts control there is a natural hesitation on their part. When fires spread, women either stop entering forests or sometimes penetrate deeper. 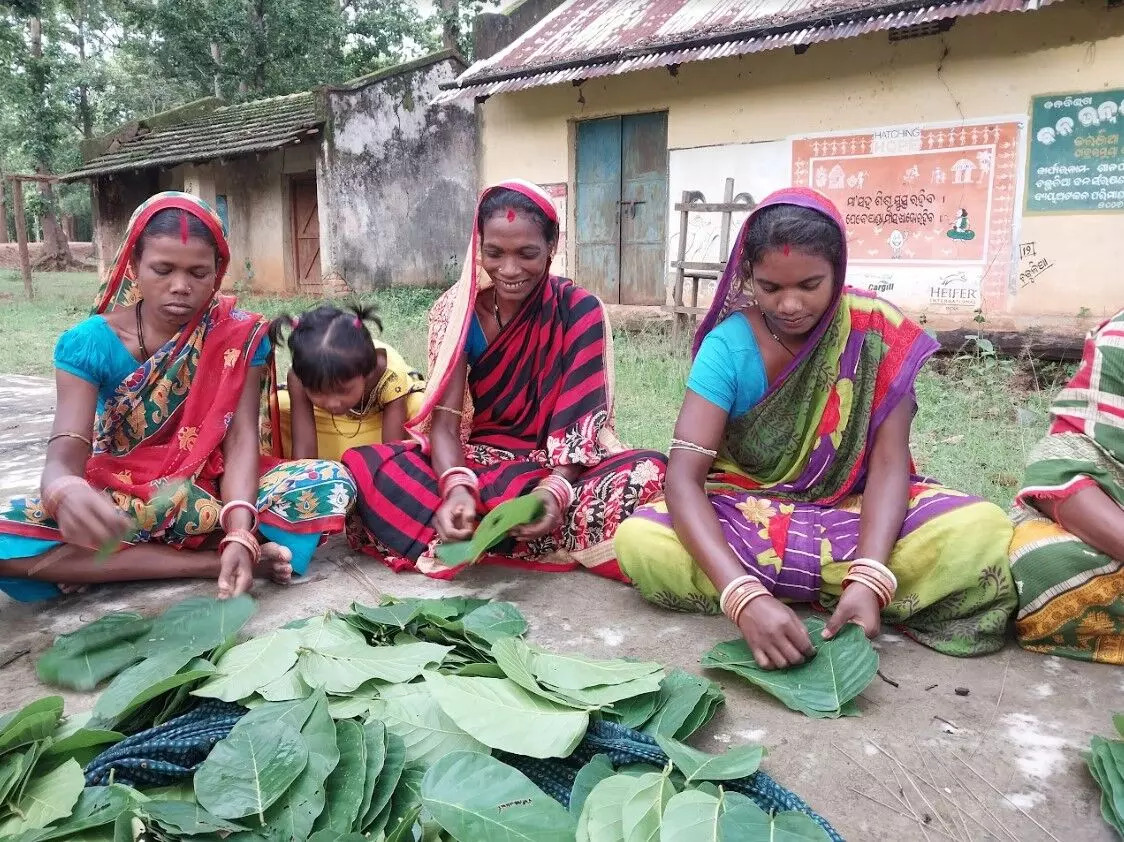 At a time when forest fires are becoming deadly due to climate change, it is communities who have to take steps to prevent conflagration. And as women access forests more than men for the collection of non-timber forest produce like Sal leaves, Mahua and mushroom, an increased level of women’s participation is needed for awareness.

But at the ground level developmental workers like Dehury faced challenges. For even a few years back women were not called to village-level meetings.

“Forget open meetings. Talks on the Forest Rights Act did not take place even at homes and as a result many women remained unaware about what it is,” said Donakuria, who is the secretary of the forest rights committee of Chakulia constituted by the gram sabha in 2021. The committee takes vital decisions regarding forest management.

Exclusion of women not only posed challenges when it came to claiming CFRR, it even put a spanner in individual rights claims under the Forest Rights Act. As most land titles in India are held by men, women were sidelined. 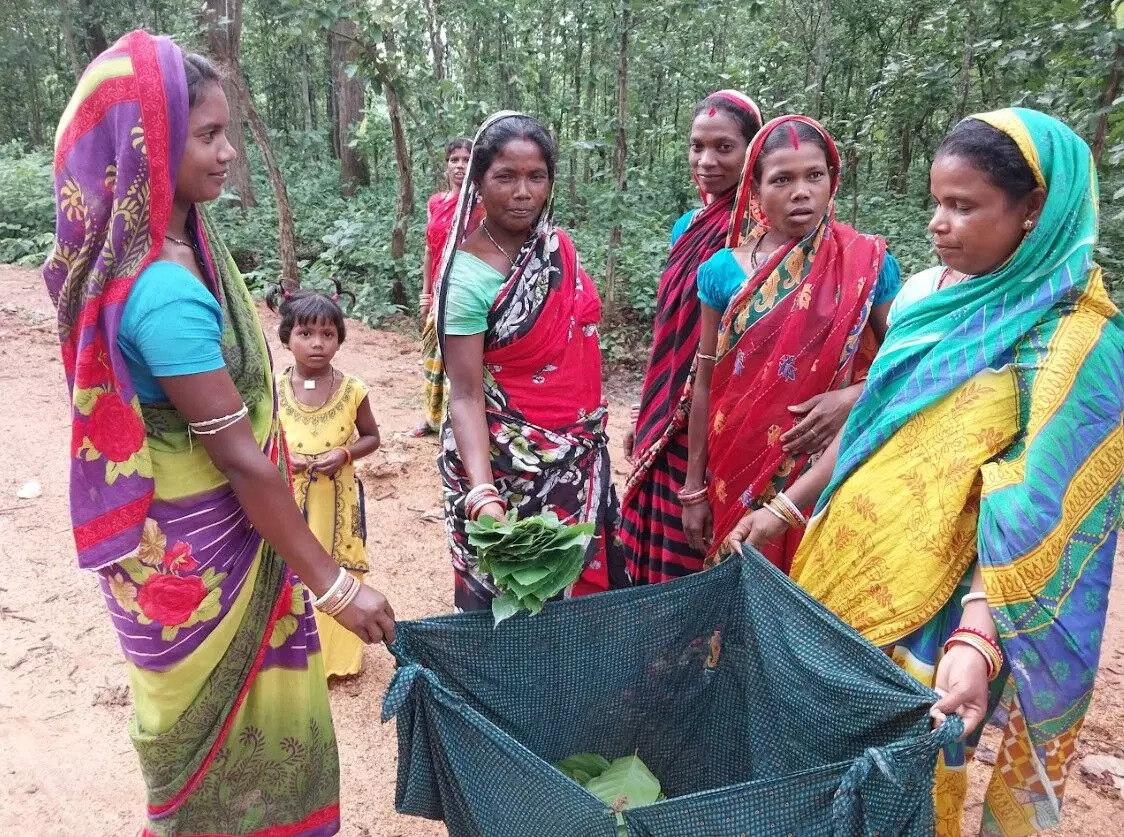 For instance, Raipada resident Sara Mohanta remained unaware about the Forest Rights Act till concept sharing meetings held in the village enlightened her. She was happy when informed that women can also apply for individual land titles. This came about when meetings organised by PRADAN focussed on women’s participation.

Mohanta cultivates paddy during the monsoon. A widow, she placed a claim over 0.80 acre for individual land title in May this year but unfortunately it was rejected during verification due to her being a non-Adivasi. However, she gained vital knowledge on the Forest Rights Act. The woman also possesses non-forest land which is less than an acre. She has a married son who runs a small shop.

Her son Sujit Mohanta said it is difficult to furnish land record details proving residence proof of 75 years. “Nobody is paying any attention to non-tribals in Odisha,” he lamented. Sara brings firewood and Sal leaves for the family from the forest on which it is dependent.

To help women place claims, the focus in Raipada and Chakulia centred on single women, as well as the inclusion of joint names as title holders, with the women’s names entered first at the time of placing claims. This increased women’s participation in discussions around the Forest Rights Act. 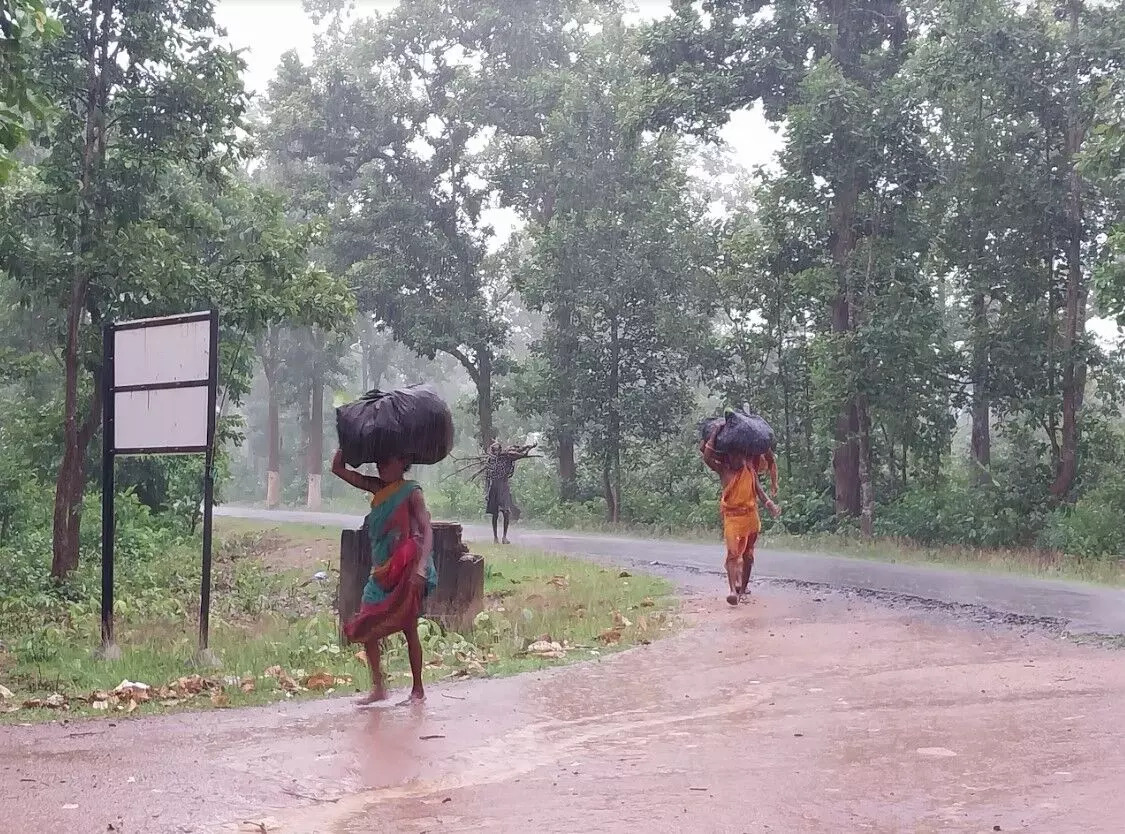 “Keeping the names of women first gives them a sense of land ownership,” said Prafulla Mohanta who works on Forest Rights Act for PRADAN in Mayurbhanj. When titles are issued, women’s land ownership is noticed more if their names are placed before that of husbands.

There has been a marked change from times when women appeared clueless. Apart from Sara Mohanta, eight unmarried women and widows have filed for claims in Raipada this year. In Chakulia, Kardei Kulaporia, a widow, placed a claim for individual land title along with a few like her. Their claims are at present going through various stages.

The participation of women is a refreshing change in Thakurmunda block which itself has low claims due to ignorance. Out of a total of 1,356 individual titles received in the block, only a few single women figure in the list.

Joint claims are absent. When the forest rights committee was formed in Raipada after the gram sabha meeting last year, over a 100 women attended it. The inclusion of a woman, Prabhati Naik, for land demarcation also inspired many women to take an interest in the whole process. 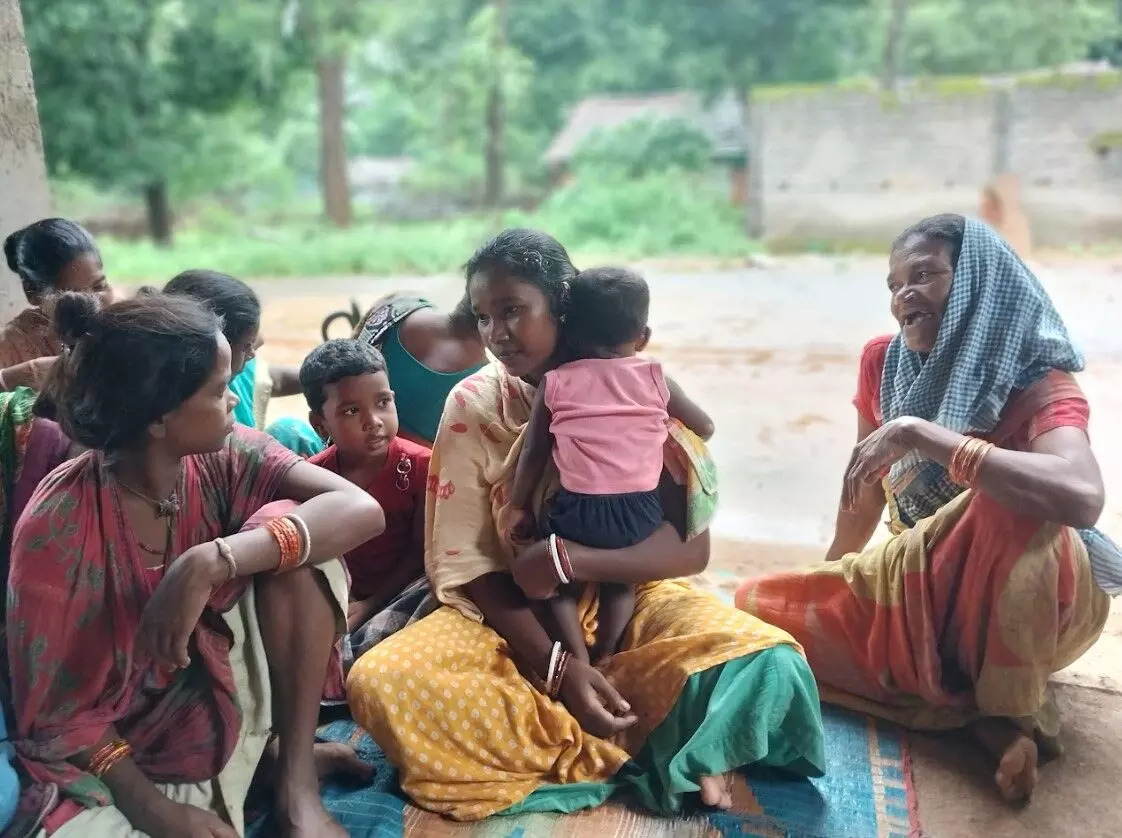 Bhama Moharana from Raipada considers the shift in a positive light, “It is imperative that women should know about the Forest Rights Act. If forests do not remain, women will face food shortage. Their family income will also take a plunge. Women in most villages here make leaf plates during the non-agriculture season and earn money.”

Though plucking happens all year round, women refrain from collection during the rains due to farm work and the presence of insects. Summer is the most favoured season for collection and making of leaf plates.

As traders often cheat women by offering low rates, the formation of women’s producer groups is of great help. In Joshipur block such groups are helping women sell Kusum (Schleichera Oleosa) seeds, Sal leaves and Mahua, locally called Mohulo. This is part of the livelihood work being carried out by Vasundhara in the block since 2018. It is a non-profit based in Bhubaneswar.

Joshipur’s Mandam village received CFRR title in 2015 over 423.0204 acres which helped women access forests with more confidence. But they feel bad about their exclusion in individual land titles. A total of 45 individual titles were received in 2015 but most are in men’s names. Only eight are in women’s names.

Resident Moti Jerai pointed out that such an exclusionary attitude makes women feel unworthy. Moti is a Ho tribal. Her husband Jambira Jerai owns the land title on 2.05 acres and she is a dependent.

Bishwanath Tung, who is the field coordinator for Vasundhara in Joshipur, said at a time when women suffered from the lack of knowledge on the Forest Rights Act, men became the entitled ones with land titles and women did not get priority.

Citing the instance of Tangrusahi village in Joshipur, Tung added that out of 58 individual titles received here only three are in women’s names. In the case of collective ownership made by the community over forest, at least women’s greater access lends them dignity and decision-making power.

The formation of producer groups for selling non-timber forest produce is making women confident. Sushila Murmu, who is the programme associate in Joshipur for Vasundhara, said such groups in 30 villages of the block are helping women sell their forest produce. The women lacked weighing machines which led traders to cheat them often when they sold individually. Most groups were formed in 2020-21.

Malati Pingua is the secretary of the producer group in Mandam village which was formed this year with 30 members. Women here mostly collect mahua, tendu leaves, kusum seeds and tamarind. Small-scale traders, who used to offer low rates, are now keeping away. The tamarind sale this year was also a success.

First published in The Citizen.

Iran and the voice of resentment

On the SC judgement on Abortion Rights