No Result
View All Result
in Conversations

In October 1947, two months after Independence, TJS George arrived in Bombay. He was nineteen years old, with a degree in English Literature. He sent out job applications––to the Air Force and to the city’s English-language newspapers. Only one organisation cared to reply, The Free Press Journal. The editor was known to hire anyone who asked for a job, but most new hires were sacked in a fortnight. George was put on the news desk as a sub-editor and eventually became an assistant editor.

In Patna, as editor of The Searchlight, he was arrested for sedition. In New York, he was a writer for the United Nations population division. In Hong Kong, he worked for the Far Eastern Economic Review as a regional editor before founding Asiaweek in 1975. Six years later, he returned to India and settled in Bangalore. He began a column for The Indian Express that ran without a break for twenty-five years, until 2022.

His seventy-five years of journalism, concurrent with India’s development as an independent nation, make for a unique understanding of events and personalities. Acclaimed for his widely historical, pan-Asian vision, George brings this far-flung experience in The Dismantling of India through 35 concise biographies, beginning with Jamsetji Tata and ending with Narendra Modi.

In this conversation with writer Githa Hariharan, George talks about his book and more. 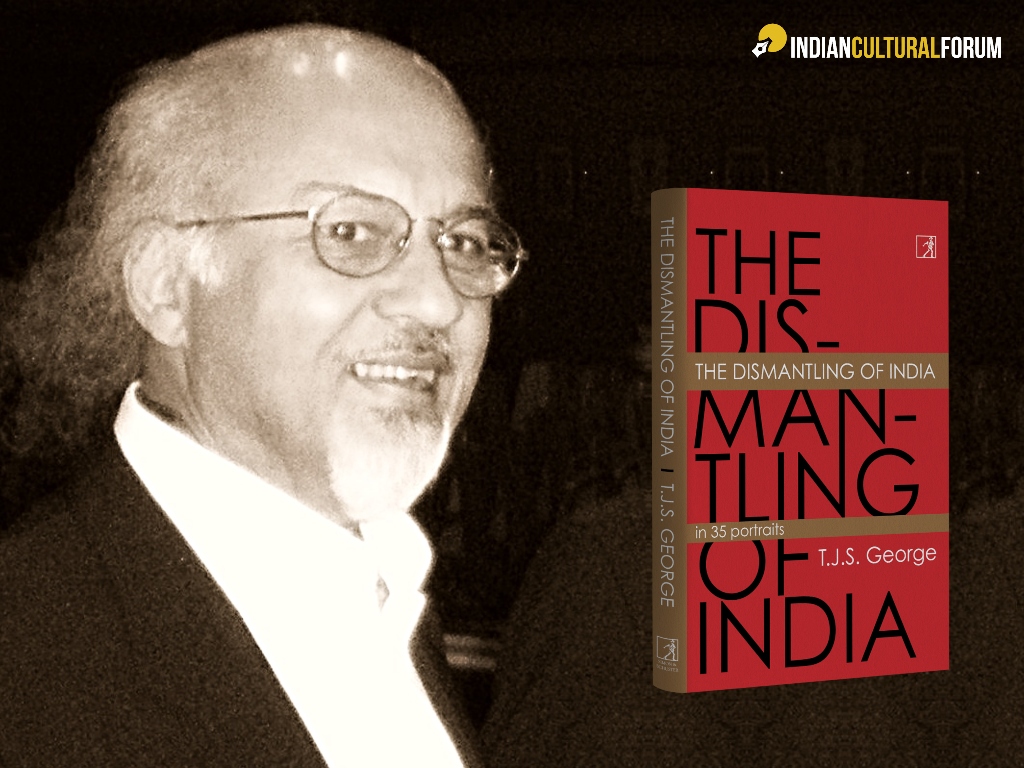 Githa Hariharan (GH): You have been a journalist for over seven decades, practically as long as India has been an independent country. I think you began with the Free Press Journal in Bombay in 1950? That gives you a very wide-angle view of how the media has developed (or regressed). Let’s begin with India. Would you say that the compulsions of the market have changed the journalism you knew in the earlier decades of your career?

TJS George (TJSG): Yes, journalism has changed. But, ‘compulsions of the market’ can’t be the only reason, or the main reason. Criticism of journalists, fall in public standards in general, degeneration of politics – there are many reasons.

GH: What about the compulsion to be in the good books of the powers that be? Perhaps the most striking examples of a submissive media are from the period of the declared Emergency, and the present moment, which many have described as an undeclared emergency. Would you comment on this ‘dismantling’ of the media’s role in what we like to boast of as ‘the world’s largest democracy’?

TJSG: ‘Largest democracy’ is different from best democracy. The compulsion to be in the good books of all those who can be generous with favours has become an important influence. That hurts.

GH: How has print journalism fared in comparison to the noisy electronic media, and the relatively independent digital media?

GH: To move further afield to an international platform for press freedom: I think it is timely for us to hear about the International Press Institute, and its efforts over the years to support freedom of the press, and also set high standards for the media.

TJSG: The IPI was influential once upon a time. But never influential enough to influence policies. So its efforts to set standards didn’t go far.

GH: In terms of your work in the international media, I especially want to hear about the focus on Asia. You were involved with the Far Eastern Economic Review, an Asian business magazine. And I recall the excitement around the founding of Asiaweek in 1975 in Hong Kong. There was talk of an Asian perspective. How did these publications fare on building such a perspective? And how did they change? Asiaweek, I know, is no longer published.

TJSG: The success of Asiaweek was remarkable. And it was overnight. Clearly, there was a widely felt need for an Asian journal with an Asian viewpoint. In the end, it became a half job, half done. I was responsible for its fall. I trusted Readers Digest and welcomed them into the ownership when we were in dire need of capital. It proved a misplaced trust. They hastened the Americanisation of Asiaweek which made Asiaweek as irrelevant to Asia as Time Magazine.

GH: Your writing voice seems especially suited to be a biographer. What I find astonishing is the range of subjects – the people you have written about, from Krishna Menon to Subbalakshmi in book-length form. And in your new book, Dismantling India, the range is quite dizzying. It’s rare to find Savarkar and Veerappan and Girish Karnad and Dawood Ibrahim and Varavara Rao within hand-holding distance in a book. Perhaps you could explain how your idea of ‘dismantling India’ holds all these people together?

TJSG: I have no personal axe to grind. I judge situations from an objective viewpoint. That, I believe, helps me see people from a perspective that helps me as a writer/analyst.

GH: Finally, a word from you about that quality we seem to need every day of our present lives, not just as writers and journalists, but as citizens: courage. You have written exactly what you think and what you think needs to be said. Dismantling India helps us hear that voice once again, loud and clear. What would you say helps to develop that kind of voice?

TJSG: Courage? I don’t think there is any shortage of that. But greed often overtakes courage and that is what creates problems.

“Truth and reconciliation require the shedding of aggressive masculinity”